The Mesa Police Honor Guard is a ceremonial police unit dedicated to upholding the highest values and traditions of men and women of law enforcement. Officers of the Mesa Police Honor Guard are committed to representing the City of Mesa and their law enforcement family locally, at the state level and nationally. The Mesa Police Honor Guard's priority is to honor our fallen officers and firefighters who have made the ultimate sacrifice on duty. They also represent the department at employee funerals (both current and retired members) who have passed away not in the line of duty. The Honor Guard unit also represents the Mesa Police Department at our annual Mesa Police Memorial service, the Arizona State Peace Officers Memorial and at National Police Week, held each May at the National Law Enforcement Memorial in Washington, D.C. In addition, the Honor Guard unit also posts Colors at major events such as Major League Baseball games, professional basketball games and other public events, as well as opening and marching in the City of Mesa Veteran's Day and Martin Luther King, Jr. Day parades each year. 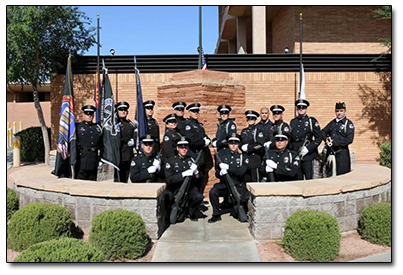 The Color Guard forms the core of the Honor Guard's activity by proudly displaying the National Color, State Color and Organizational Color at various events. The presentation of colors is customary at the opening of patriotic and sporting events and is often accompanied by the playing of our national anthem.

The Honor Guard Rifle Drill team is comprised of ten officers, who embody the values of law enforcement through a display of discipline, focus and teamwork. The Rifle team drills with the M1 Garand rifle and incorporates precision marching movements into their ceremonial presentations.

The Honor Guard Bugler fills several important roles with the Honor Guard unit. They play taps in honor of our fallen officers during funeral services, showing the highest respect for family and all in attendance. In addition, they play our national anthem during special events throughout the year.