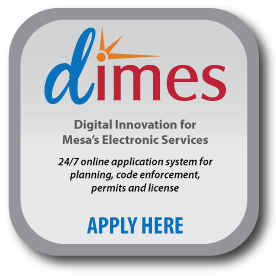 Long Range Planning in the City of Mesa focuses on the "big picture" of how the City should look and function in the future. It builds upon people and events of the past that have shaped Mesa's present. It is the tool for making conscious decisions on how the City should take shape in the coming years. This area of responsibility implements, updates and maintains the Mesa 2040 General Plan and associated documents such as Sub-Area Plans.  It is at the planning stage that the direction and policy is set, the zoning ordinance and other tools are created to implement the plan.

Mesa 2040 General Plan [PDF]  This Mesa 2040 General Plan was adopted by the Council and voters of the City of Mesa in 2014.  This Plan contains the current policy direction for the development of the community.  By state statute requirements, rezoning of property must be consistent with the general plan.

Sub-area and Neighborhood Plans.  In addition to the General Plan, the City of Mesa has developed several sub-area and neighborhood plans to refine the development policy direction for specific areas of the community.  These plans include:

Amendments to the General Plan

The first step for a General Plan amendment is to apply for a pre-submittal conference.

Free viewers are required for some of the attached documents.
They can be downloaded by clicking on the icons below.